Reserve Now(select your reservation quantity below) 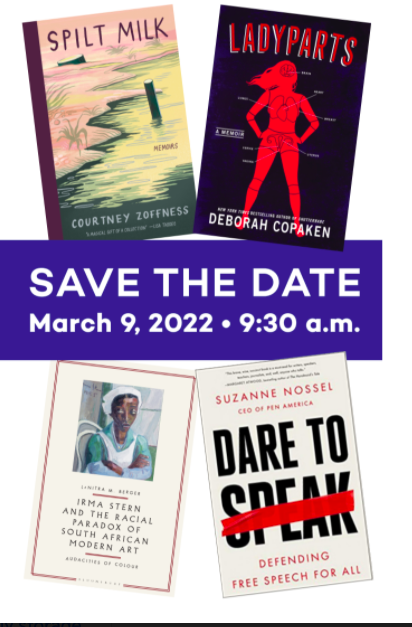 Come Join us for the exciting event!  You will hear from four outstanding speakers.

Deborah Copaken
Side-splittingly funny one minute, a freak horror show the next, Copaken’s irreverent inventory of both the female body and the body politic of womanhood in America is an era-defining memoir.

Vulnerability soaks through Zoffness's collection of essays reliving her childhood anxiety disorder as manifested in her firstborn, enduring brazen sexual advances by a student, grappling with her young son’s cop obsession, challenging her Jewish faith and much more.

Dare to Speak: Defending Free Speech for All
Suzanne Nossel

This urgent primer by the CEO of PEN America equips readers with the tools needed to speak one’s mind in today’s diverse, digitized and highly divided society without resorting to curbs on free expression.

Irma Stern and the Racial Paradox of South African Modern Art: Audacities of Color
LaNitra M. Berger
Spanning the Boer War to Nazi Germany to apartheid South Africa and into the #RhodesMustFall movement, this illustrated chronical of Irma Stern shows why she became South Africa's most prolific painter of Black, Jewish, and Colored (mixed-race) life while maintaining controversial positions on race.

Go Back |  Remind Me |  Send this page to a friend