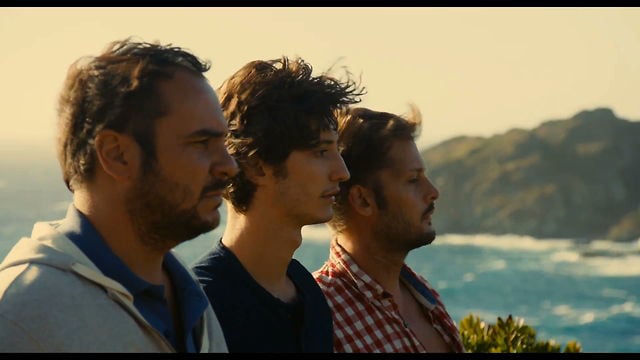 heading out to Corsica together?

The answer is Charlie. This plucky, adorable blond (Mélanie Thierry) let each of them into her heart, and the adoration was mutual. Boris was passionately in love with her. Elie developed a teen crush, which in time ripened into a sibling relationship. And Maxime was crazy about his babysitter. He alone was unaware that Charlie was terminally ill. Coming to grips with that loss will bond Charlie's three best friends over their 560-mile journey to her island beach house, where she had often invited each of them to join her. Now they are taking her up on her offer, if only to scatter her ashes and pay last respects.

Their misadventures will veer a bit from the usual "buddy movie" path. Sure, the journeymen bump up against one another's quirks, tastes and values before their de rigeur coming together, but there's little of the violence or macho banter that traditionally

As the tale makes its propulsive way across the French landscape and Mediterranean waters, a clearer picture emerges of the human nature on display. Some of the discoveries take a little digging. Boris has all the grace of an ox, yet underneath his burly exterior is a sensitive, romantic soul. Elie, by contrast, looks like a tormented poet, but is made of tougher stuff. Innocent-looking Maxime provides the butane burner for this roadie with his antics of restless youth. But all along the way, a bittersweet mix of humor and pathos accompanies their quest. Pretty much any common ground the trio finds starts with their flashed-back escapades with Charlie. Add to that the unlikely chemistry among Demaison, Duvauchelle and Niney.

Debut director Gélin has more than a passing acquaintance with actors and their screen dynamics. His grandparents Daniel Gélin and Danièle Delorme were classic screen actors, and his father, actor/ producer Xavier Gélin, cut a popular figure in French entertainment both onscreen and off.

By turns whimsical and touching, Like Brothers will be screened at the Greenwich Bow Tie Criterion Cinemas (2 Railroad Avenue) on Wednesday, November 18, 7 pm. Tickets, which can be purchased here or at the door, are $15 -- or $118 for all 10 films in JCC Greenwich's Davis Film Festival.