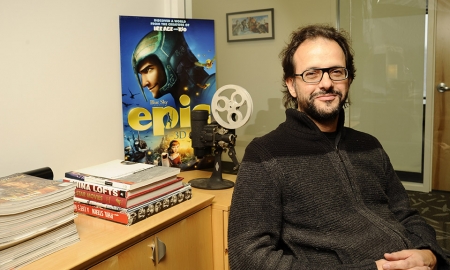 If you're among the global moviegoers who helped bring 3-D adventure comedies Rio and Rio 2 nearly a billion dollars at the box office, you've beheld some of the latest CGI magic coming out of Blue Sky Studios. Both of these animated works feature the input of wizzy cinematographer Renato Falcão, who joined the Greenwich hit factory in 2009. Other Blue Sky titles he has collaborated on include Ice Age:Continental Drift, Epic and the imagery to date for Peanuts, the Charlie Brown flick slated to open November 2015.

Raised in Rio de Janeiro, Falcão spent 25 years shooting independent films and TV shows in Brazil. He also wrote, directed, produced and shot the black-and-white silent comedy Margarette's Feast, which was released in the US, as was a romantic comedy he shot called American Desi.

"Five years ago there was a big wave among all the animation studios to bring cinemagraphers to consult on how a cinematographer would shoot on a live action set," Falcão recently told jccgreenwich.org. We asked the noted DP to reflect on his five years of contributing to blockbuster successes and what it means to be a cinematographer on an animated film.

RF: The result should be the same. It should look like a regular movie. One difference, which is huge, is how many weeks you're shooting. You can do principle photography on a live action movie in four to eight weeks -- at most maybe 10 weeks. For us it's at least three years. At Blue Sky Studios you have 500 people working on a movie. It's a pipeline. Everything is split into groups. A movie goes from one part of the pipeline to the next and keeps moving.

Q: How does lighting differ in live action versus animated productions?

RF: That's one of the amazing differences. In animation, lighting and camera are very separate. Lighting is much heavier to render. It's very complicated, so the lighting is done after the camerawork and animation are done.

Q: Is that why the blackboards at Blue Sky Studios look like a mad scientist got ahold of them?

RF: The lighting in animated films is like real lights. The scientists recreate it. They copy all the properties of real light and these are applied as computer algorithms. Every pixel is rendered like a real light would be. It's very sophisticated physics, especially if the light is bouncing or if it's water that the light is going through.

Q. Do you wield an actual camera at any stage of the production?

Q: What were the challenges of "shooting" the seafaring sequences of Ice Age 4?

RF: Ice Age 4 is a huge journey on the ocean where the earth is breaking apart when the guys are on this ship hit by an iceberg. We had to simulate a camera on a ship. You can recreate really close to what it looks like. It was so much like bouncing that we got seasick. It was like, "We're getting dizzy here!" We had to find a balance that looked like it was the ocean, but you're not sick. It was really fun to get it right, but it took a while.

Q: What cinematography issues came up on Rio and its sequel, Rio 2?

RF: Rio was trying to really capture Rio de Janeiro and make it look like a real live action movie. Rio and Epic were probably Blue Sky's closest films to reality.Epic was different because it was its own universe, with small people and regular people. Rio was recreating a real city that people knew. So the challenge was trying to pretend there's a helicopter flying or a guy walking in a favela; would that be captured with a guy running with a handheld camera? Rio was the first film I worked on at Blue Sky, and I was amazed to see that you can do all that with a computer.

Q: Given that there are different teams in what you're calling the "pipeline," do you share ideas with a director as you would on a live action set?

RF: That's exactly how it works. The only difference on that front is that we'll do that for three years. My job is much more focused on the camera side, which means I'm involved relatively early on on, though by the time it gets to us it's pretty much in the execution phase. But every day we have meetings. Sometimes there's a problem with the movement of a featured character or thing, so you have to tweak the camera, but the exchange is daily. It's very intense.

Q: Once a film is in production, can changes be made to the narrative arc?

RF: The whole story team, including writers, are creating ideas. So they have the biggest input. We talk a lot about the style at the beginning of the movie. Once that's established it's more about doing the shots. At that stage it's really too late to propose big changes. You have to be careful in animation. There are so many options that it's really important to stick to the style. Once you begin work it's really too late to change the vision.

Q: What were some of the sources you used to determine the style for Rio?

RF: I bought a lot of photography books, and we brought the art director to the Amazon to see what it  looks like. I had been there before. The big challenge was capturing how huge it is. Even on live action it's very common to miss how vast it is because you don't have the proportions right. So we did some shots that really show the scope.

Q: How does an animator strike a balance between, say, how much bird and how much human actor goes into creating a parrot in Rio?

RF: The animator could recreate exactly how a parrot would walk, but that wouldn't be appropriate because it would be too animal. But he also has to be careful not to be too anthropomorphic -- not to make it look like how a person walks. There's always this combination of proportion of animal and proportion of human, because with the human voice it could almost be as if there were humans acting. That balance is really critical -- the percentage of human to animal.

Q: What sort of research goes into it?

RF: There's a lead animator for each character. He'll do a lot of research on the actual animal movements. Animators will research everything from skeleton to beaks. They'll do a lot of live action research. And then they bring in the human part of it. For example, the wings are the macaws' hands. The way that they walk can be very funny, like the mammoths in Ice Age. The squirrel-rat called Scrat doesn't have a lot of human in him, except for his expressions when he gets mad. But otherwise he goes back to almost 100 percent animal. He never talks, only makes those crazy sounds. They keep a lot of the very characteristic features of the animal, like a crazy face.

Q: How do the actors influence the process?

RF: We shoot the actors when they're recording the sound, but sometimes even after the character's voices are in the can, the animators bring back the actors. For example, when Jesse Eisenberg did Blu (of the Rio series), the animators tried to build his personality into the character. They had the directors at the recording session giving him notes.

Q: Will they watch how his body moves?

RF: A little bit, but it's more the emotion in the way that he talks. Let's say he's on a microphone doing a character running. The animators will interpret how he would look running this way or that way. It involves a lot of imagination. Every person has a very specific voice. Jesse is a little neurotic, so they have to bring that into the character. But the animators really depend on the actors' voices in order to do their job.

Q: Give us a little sneak preview of the Peanuts comic strip project.

RF: It's very different from other projects that we've been doing, because it's much simpler. We're trying to be really true to the drawings of Charles Shulz, so the camera work is minimal. For Blue Sky it was a big change. We had to calm down all the cameras. Making it simpler is a much more challenging than doing a regular action sequence.