Where Not to Stay in Miami 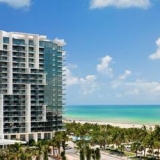 South Beach hotels bring to mind glamour, fawning service and the exacting standards of their jet-set clientele. Apparently not W South Beach. The Collins Avenue franchise is “terrible,” says a friend of JCC Greenwich who is a savvy world traveler.

“It tries to be fashion-forward and chic, and on the surface it is, but it is ridiculously overpriced for what you get,” she reports from her recent stay. Scratching that surface, she found the hotel to be “very poorly constructed and run.”
“Go to open the shower and the door knob falls off. ”Another example? “The plumbing isn’t working.” Her “wow” isn’t quite the one that W South Beach likes to say its “W” stands for.
To add insult to injury, patrons pay dearly to rusticate. Worse yet, they're nickeled and dimed. “They charge you $14.75 a device per day,” she balks. “When you’ve taken a wildly expensive suite and then they ask you to pay per connection...” She does the math: “So if you have a phone, an iPad and a computer and you’re going to be working for four days, that means you’re paying an extra $177 a day. It was so offensive.”
Not only has W South Beach lost a client, but if its SoBe neighbor The Raleigh hotel follows its example, it too won't be seeing the likes of our world traveler any trip soon. The art deco hotel has recently been sold to W South Beach developer David Edelstein (and his SBE Hotel Group partners).

0 comments on "Where Not to Stay in Miami"